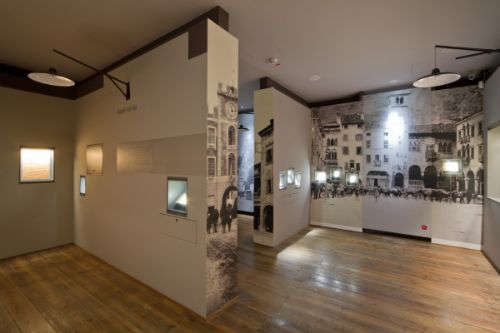 The three rooms on the first floor are dedicated to the lives of civilians and the Austro-Hungarian occupation of Friuli and eastern Veneto in 1917-1918.

The immersive path continues with the discovery of drawers and doors, hiding written and video documents. The first room is a reconstruction of one of the city buildings ransacked during the occupation. Newspapers and audio exhibits in various languages illustrate the encounter between local citizens and the 15 idioms spoken by the Austro-Hungarian Empire. Lighting is focused on the displayed items to recreate a curfew in a ghost town, like Vittorio Veneto, abandoned by its people and crossed by soldiers and refugees.

Fear of violence and looting gives room to resistance against the enemy, especially through espionage, the theme of the second room.

The perspective then changes completely as the exhibits focus on the difficulties of the occupying army to manage the newly conquered territory as well as on its domination and propaganda strategies.

The floor examines an often forgotten issue through a "glocal" approach, talking about an international and global issue such as military occupation from a local and territorial perspective.