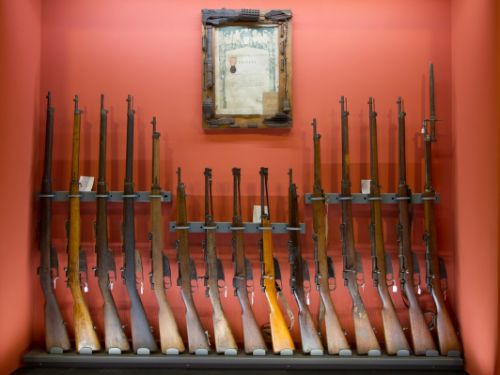 The small room takes visitors back in time to when Luigi Marson used to collect weapons and ammunitions on the ground floor of his home, at Via Lioni in Vittorio Veneto. To him, it was the most sacred place, where passion and enthusiasm translated themselves in a horror vacui allowing no empty spaces.

Visitors can view three glass cases. The left case contains ten Austro-Hungarian army rifles, while the right one displays ten rifles from other countries involved in the conflict. At the centre there are 15 rifles from the Italian Royal Army, many of which are intact in all their parts, and their bayonets, ready to be mounted on the shafts. In front, two large panoplies: the first contains 56 semi-automatic guns; the second features 33 weapons, mostly revolvers that formed part of the fighting armies equipment. On a stand facing each other are two well-kept machine guns with their tripods, which dominated on the Italian battlefields: the Italian Fiat Revelli machine gun and the Austro-Hungarian Schwarzlose Maschinengewehr, probably the most powerful firearm manufactured by the war industry for the First World War.

In addition, a number of shelves display several types of bullets, hand grenades and bombs, bayonets and sabres which belonged to army officials. Among weapons and ammunitions, mementoes also serve as a reminder of some great air force achievements.